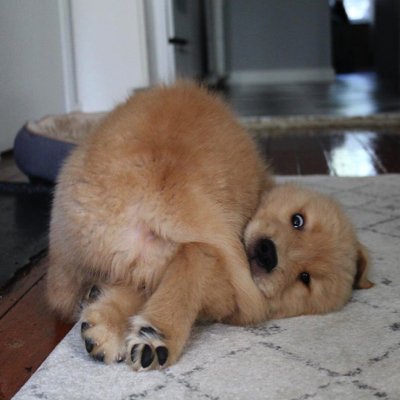 Why do dogs chase their tails?

Is it for fun, or is there some deeper meaning behind it?

A dog chasing its tail is a stereotypical image, but not many people actually know why our canines do it.

Truthfully, it can seem pretty pointless to us.

However, while this behavior might seem rather innocent, it can be a sign of underlying problems that need to be addressed.

There are a number of different answers to the question “why do dogs chase their tails.”

But how do you tell why your dog is chasing his or her tail?

And when is it time to take your dog to the vet?

In this article, we’ll discuss all the reasons behind why dogs chase their tails and help you figure out if it might be time to have your pooch checked out.

What Does It Mean When a Dog Chases Her Tail?

A dog might be chasing its tail for a number of reasons.

The most common and innocent reason is simply out of boredom.

Dogs need to run and have fun. When they don’t, they might resort to chasing their own tail.

Another reason is for attention.

If your pup has noticed that you pay attention to him or her after a tail-chasing excursion, that may be a technique used to continue to get attention.

Genetics can also play a role in how much a dog chases her tail.

Certain breeds tend to do it more than others.

There are also a couple harmful reasons your dog might be chasing her tail.

Dogs might chase their tails if it they’re infected or irritated by fleas or ticks.

The severity of the problem can vary quite a bit depending on what exactly is wrong.

Dogs can also chase their tails as a compulsive behavior.

Dogs most commonly chase their tails out of boredom.

Dogs require exercise and fun every day just like humans do.

If they don’t get it, they sometimes attempt to entertain themselves by chasing their tail.

This is particularly common in puppies, who tend to be more active than their adult counterparts.

If your dog is chasing her tail and you have been unable to find a cause, it is probably due to boredom.

If your dog seems to be chasing her tail out of boredom, it might be a good idea to figure out why, exactly, she is bored.

While it is not necessarily harmful for a dog to chase her tail when she is bored, it can be a sign that she is not getting enough exercise or being mentally stimulated enough.

Getting your dog outside more or purchasing some toys designed to mentally stimulate her might eliminate the tail chasing behavior.

This reason usually emerges after a dog has begun chasing her tail for a different reason.

There is nothing innately wrong with this behavior, and it will usually not progress to the point of injury.

However, if your dog chases her tail regularly for attention, then this can cover up illnesses that might cause a dog to chase her tail.

In other words, if your dog chases her tail for attention but then develops an infection, you would not notice a change of behavior and might miss the infection altogether.

Because of this, we recommend regularly checking your dog’s tail for problems, even she is usually only chasing her tail for attention.

Article by Kristin Hitchcock
Scroll Up Skip to content